January 2012 – Listening to the new Factory Minds CD titled “America’s Not at War” quickly brings to mind Social Distortion mixed with Operation Ivy, but with a high focus on straight-ahead melody. This CD, produced by Ray Stevens II, a member of Los Olvidados, has a clean pop-punk production, less fuzzed-out than early Social Distortion releases. 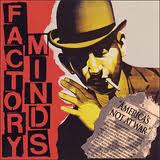 The band features members of Call to Arms, Tried and True, and The Last Chordz. Drawing from their influences of the California skate punk scene, they recorded these 11 tracks, with the title track, Factory Minds, being one of the best tracks on the CD.

The track has the melodies fitting of the pop-punk bands who recorded with Lookout Records in the late 90’s. All of the other tracks on this CD carry the ‘just have fun’ sense throughout, making this a Keep it on Your Playlist CD.